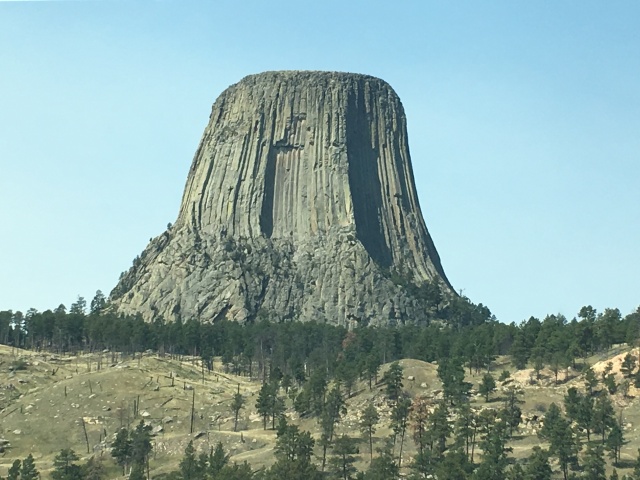 Morris has always wanted to see Devil’s Tower in South Dakota ever since he saw that movie “Close Encounters of the Third Kind” in which the tower is featured prominently as the place where a spaceship landed.

“Didn’t you think it was a good movie? ” he asked.

“It was good for that type of movie,” I told him. I’ve never been a big fan of science fiction. But all I heard from the time we left home was, “When are we going to Devil’s Tower?” It was way off our route, but of course we had to go anyhow.

Devil’s Tower is a geologic feature that protrudes out of the rolling prairie surrounding the Black Hills. It is considered sacred by many Native American tribes. You can see the thing from 10 miles away. When I took geology in college, they said it was hardened manga from an ancient volcano that had eroded away. Now, however, they say it’s an outcropping of igneous rock. Whatever…

They allow climbers on the face of the rock. There were some climbers the day we were there, but they looked like tiny ants from where I was. Most climbers now are free-style climbers. The first people to climb the tower, however, were two local farmers who built a ladder long enough to reach the top. That must have been some ladder.

I asked Mo to drop me off at the Visitors’ Center so I would not have to walk a long way from the parking lot. When I came out, I saw him headed across the parking lot with a camera. I sat down and waited. In an hour he came back out of breath and sweating. “I walked all the way around it,” he said. “I think I saw where the ship landed.”

I guess he didn’t see any aliens or he would have left with them. If he goes, I hope he remembers to leave me the car keys.

My stories are about daily life and the funny things that happen to all of us. My columns have been published in numerous newspapers, magazines, anthologies, and websites.
View all posts by Sheila Moss →
This entry was posted in Wyoming and tagged Black Hills, Close encounters, Devil's Tower, Geological features, Rock climbing, Sacred places, Science Fiction, Travel. Bookmark the permalink.
Loading Comments...